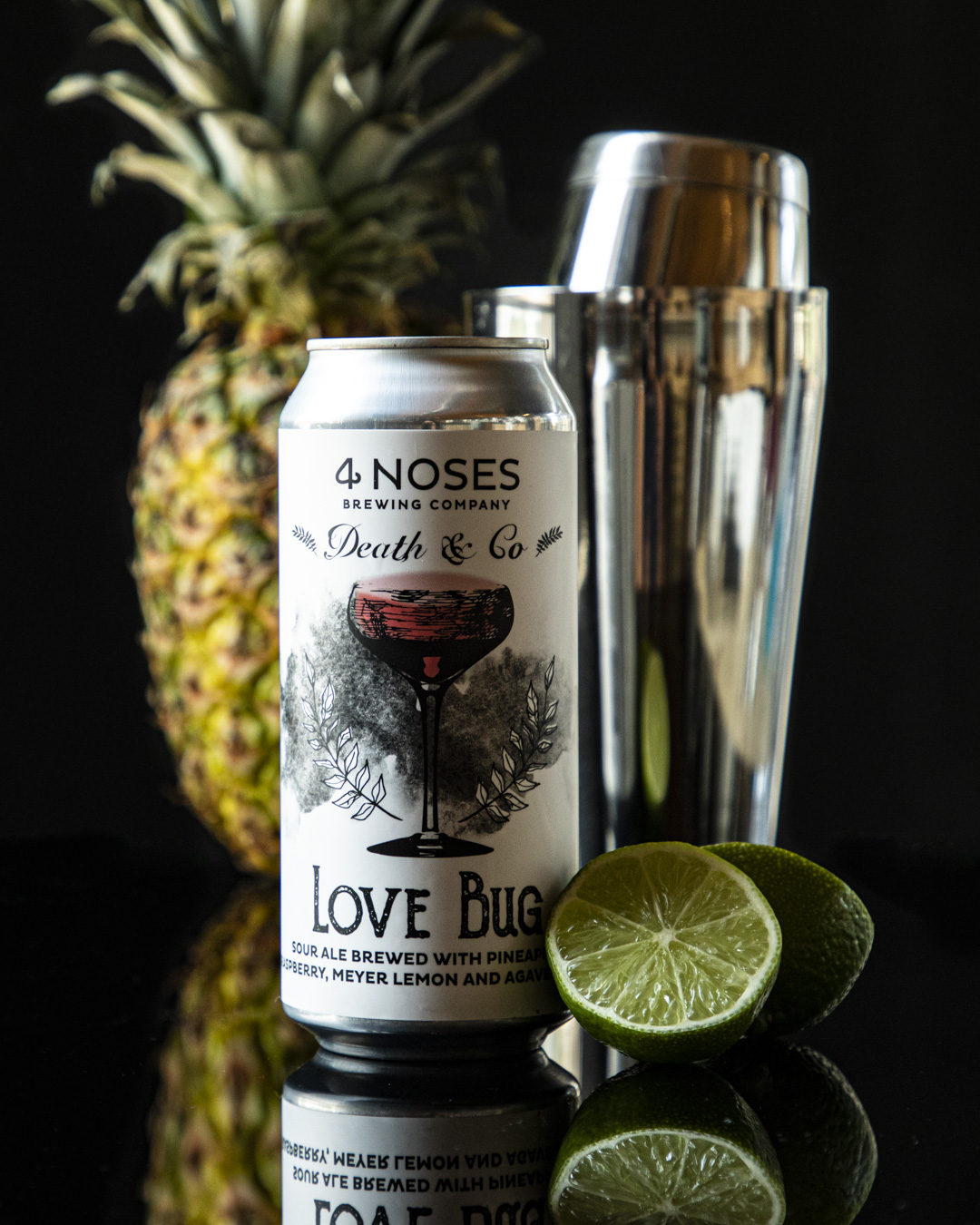 “Do you often find yourself daydreaming of a collaboration between 4 Noses Brewing and Death & Co.? We do! We have been dreaming up a new Death & Co. cocktail-inspired beer for several months now, and we are ready to share this magnificent creation with you. After our smashing success from Monkey’s Fist, our first collaboration with Death & Co., we decided to continue to push ourselves to craft a beer that bartenders would love to drink and serve.

Introducing Love Bug, our take on the Love Bug cocktail created by one of Death & Co Denver’s first Lead Bartenders, Sam Penton. It’s a bright, tart, and slightly tropical variation on a tequila sour, made with Blanco Tequila, Mezcal, lime juice, pineapple juice, raspberry syrup, and egg white. The Love Bug catches the eye of nearly every bar guest immediately because of its beautiful, light pink color and fluffy nature. An instant crowd-pleaser, its sharp and lightly smoky character is complemented by the tart raspberry and juicy pineapple. Our goal with this beer was not only to be inspired by the Love Bug cocktail but to create a delicious well-rounded beer.

We designed a recipe that cleverly delivers a similar experience to the Love Bug cocktail but in beer form! We put our brewing brains to work to find the best brewing ingredients and processes to make our own version of Love Bug. Agave Nectar and Smoked Oak Wheat were selected to nod to the beautiful Mezcal and Tequila, the Flaked Wheat and Oats work to fluff up the mouthfeel akin to a shaken egg white. Raspberry & Pineapple bring the fresh fruity tart bite you crave from the Love Bug cocktail, we dialed in a new yeast strain to bring a bit of sour goodness, while the Agave Nectar softly balances out the tartness after each sip.

We wanted to create a beer with all the nuance of the original cocktail, that would leave you wanting more. Love Bug has balanced fruits and subtle smoke that one would expect from one of the world’s finest cocktail bars.”

You can find out more about which cookies we are using or switch them off in settings.

This website uses cookies so that we can provide you with the best user experience possible. Cookie information is stored in your browser and performs functions such as recognising you when you return to our website and helping our team to understand which sections of the website you find most interesting and useful.

Strictly Necessary Cookie should be enabled at all times so that we can save your preferences for cookie settings.

If you disable this cookie, we will not be able to save your preferences. This means that every time you visit this website you will need to enable or disable cookies again.

Welcome to The Ramble Hotel and Death & Co Denver! In accordance with updated guidance from the CDC, masks are no longer required to be worn inside the building for fully vaccinated guests. If you are not fully vaccinated, we ask that you kindly keep your mask on while entering the premises, or while up from your table and circulating about the building. For information on up-to-date property-wide COVID-19 protocols and procedures, please click HERE.